The Smithsonian National Portrait Gallery has commissioned Cuban-American artist Jorge Rodriguez-Gerada to create a six-acre portrait on the National Mall in Washington DC. The “facescape,” was created out of 2,000 tons of sand, 800 tons of soil and 8 miles of string. It is so large, that it can be viewed from space.

Titled “Out of Many, One” (the translation of E Pluribus Unum) the portrait was rendered using high accuracy satellite topography technology which positioned 10,000 wooden pegs that draw out the piece. It is a composite portrait of anonymous young men from different ethnic backgrounds that he met and photographed while walking on the National Mall. Visitors can experience the facescape by walking through it, from the top of the Washington Monument, while flying into and out of Washington, DC, or via images taken by satellite.

These satellite images were captured by DigitalGlobe’s GeoEye-1 satellite on Oct. 6, 2014. 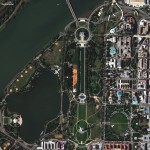 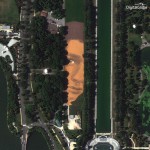