A participative intervention created with ephemeral chalk spray paint, based on the concept of remembrance, and measuring more than 23.500 square feet.

“RECORDAR means to pass through your heart. When a memory is relived we feel the same things that where lived and felt in the past.”

Coming form a personal and family history that marks the artist´s identity, his own experience of being the child of Cuban exiles in the US and a grandchild of Spanish exiles in Cuba, the artwork Recordar aims to give homage to the 465.000 men, women, and children who between the years of 1936 to 1939 lived through the Spanish Republican exile and crossed the frontier to France in order to save their lives.

Recordar calls us to reflect upon the importance of our historic memory and the social problems that keep repeating themselves. The piece invites spectators to pass through their hearts those experiences, that as part of history conform our cultural legacy, so we can avoid repeating in the present the horrors and indifference of the past.

Gerada was born in Cuba, he was raised in the US and is currently a resident in Barcelona. He has created one of the largest public artworks in Spain, measuring more than 23,500 square feet (2,200 square meters). The participative and ephemeral artwork covered the Plaza Comercial located in the Born section of Barcelona on October 1st, 2016. It was created with the help of local residents and more than 500 volunteers, had the philanthropic support of the small business association Born Comerç and the production support of Subagora Agency.

“Recordar” is an artwork that can be classified as an urban performance and was realized with the use of GPS technology provided by the company TopCon. The artwork was then filled in with the collaboration of volunteers using chalk spray paint.  This ephemeral, non-toxic and washable paint was created by Montana Colors with a special formula that would not damage the pavement and came in recyclable cans. 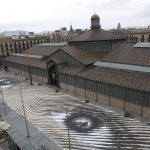 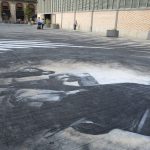 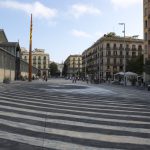 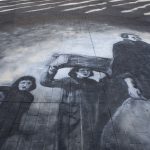 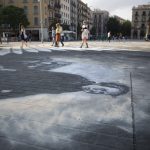 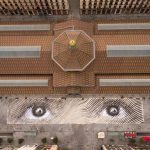