By Rice, in Raval – Barcelona

Street artists in Barcelona have been showing their support for rapper Pablo Hasel. The singer has been at the heart of a controversy in Spain in a case which cuts to the heart of rules around freedom of speech. Showing support for Pablo Hasel, artists took to the streets. They created a number of murals at the Parque de las Tres Chimeneas in the city on Sunday 7th of February. The initiative i s repeated this Sunday 21st February. 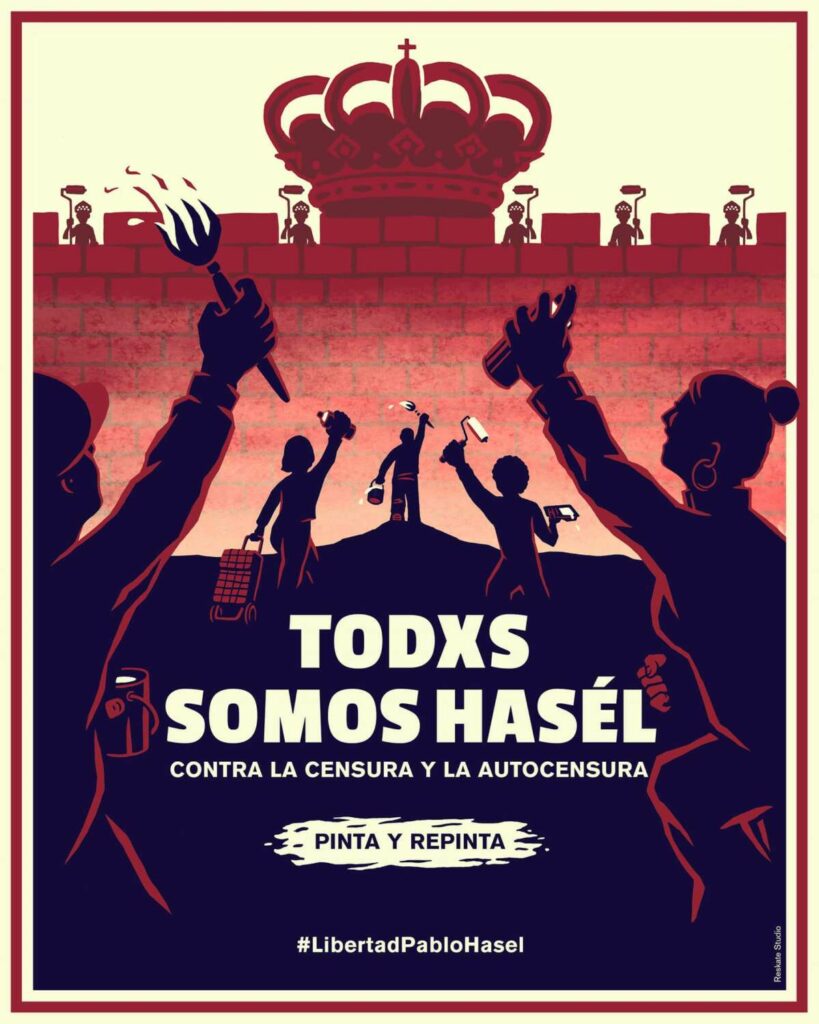 Pablo Hasel faces prison for “glorifying terrorism and insulting crown and state institutions”. A singer and activist, he was originally convicted to two years and one day in prison in March 2018 by the Spanish High Court. This was later reduced on appeal to nine months and one day. The judge at this point said his messages did “not pose a real risk to anyone”. This was a decision upheld by the Spanish supreme court in May 2020.

At the heart of Pablo Hasel’s conviction were 64 messages he shared on twitter between 2014 and 2016. It also referenced a song he shared on youtube. He was convicted under a 2015 statute known as the ‘gag’ law in Spain. His lyrics were found under that law “to have encouraged violence and insulted the monarchy”. It is something which has been controversial in the country. The law itself “bans speech not only for glorifying violence, but also for insulting religions or the monarchy”.

One of the artists applying detail to Pablo’s face

The case comes at a time when the state itself has been looking at ending prison terms for alleged crimes involving free speech. As a result it is something which has stirred strong emotions in Spain. Pablo Hasel himself is a figure well known already. He has had run ins with the law and state before. Previously he was convicted in 2015 for lyrics which expressed similar sentiments. Originally he was due to serve two years for those offences though he never actually went to prison. It was partly this which led the judges in the later case to enforce the prison sentence for his later conviction.

A petition protesting against the imprisonment has gained traction in artistic circles. Saying that “the imprisonment of Pablo Hasel makes the sword hanging over the heads of all public figures who dare to openly criticize the actions of state institutions all the more evident. We are aware that if we allow Pablo to be jailed, tomorrow they could come after any one of us, until they have managed to stifle any whisper of dissidence”. The filmmaker Pablo Almodovar and actor Javier Bardem have come out in support of it.

Wanting to show their own solidarity with Hasel, street artists in the city created a series of artworks. The location in the Parque de las Tres Chimeneas is a well known skate park and graffiti hall of fame. Street art is a regular sight here and the walls are generally open to paint on. Many of the artists have used the Catalan expression LLibertat D’Expressio which means ‘Freedom of Expression’. It is very much this sentiment which has prompted the artists to show such a public support.

Of all the Spanish institutions it is the crown which seems to be most prominent in the mind of the street artists. The gag law specifically seeks to ban criticism of the monarchy. It’s something which is unacceptable to many especially in Catalan which is a fiercely independent state. Many of the murals feature King Juan Carlos prominently. One piece from Roc Blackblock was painted over by the Barcelona authorities soon after it was painted. It showed the king with the word ‘Ladron’ or ‘thief’ pinned to his head. Words describing him as an ‘elephant killer‘ and ‘son of a dictator’ were written around it. Barcelona city council have since apologised for removing the piece.

There were a number of other deeply political murals. One from artists Reskate and Chamo San showed the king waving from behind bars. Another from Cinta Vidal showed the king with a roller painting over an image of Pablo Hasel as if to erase him. A piece from Galleta Maria meanwhile showed a double headed snake. It had the heads of the monarchy and the judiciary coiling around the mouth of a woman. The symbolism is clear in that they are combining to prevent her from speaking. 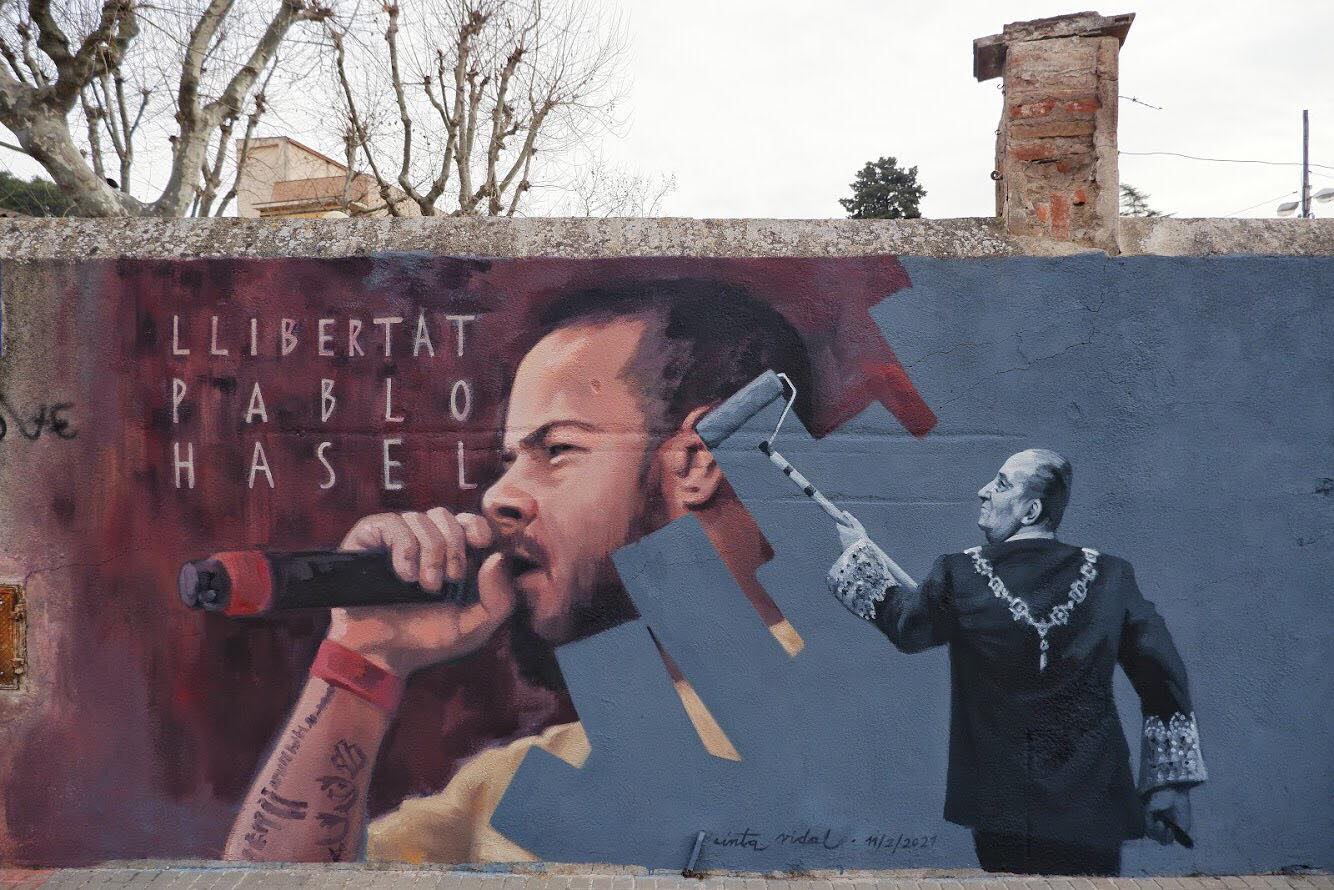 Location of the next graffiti jam on Sunday 21st for freedom of speech and in support of Pablo Hasel: 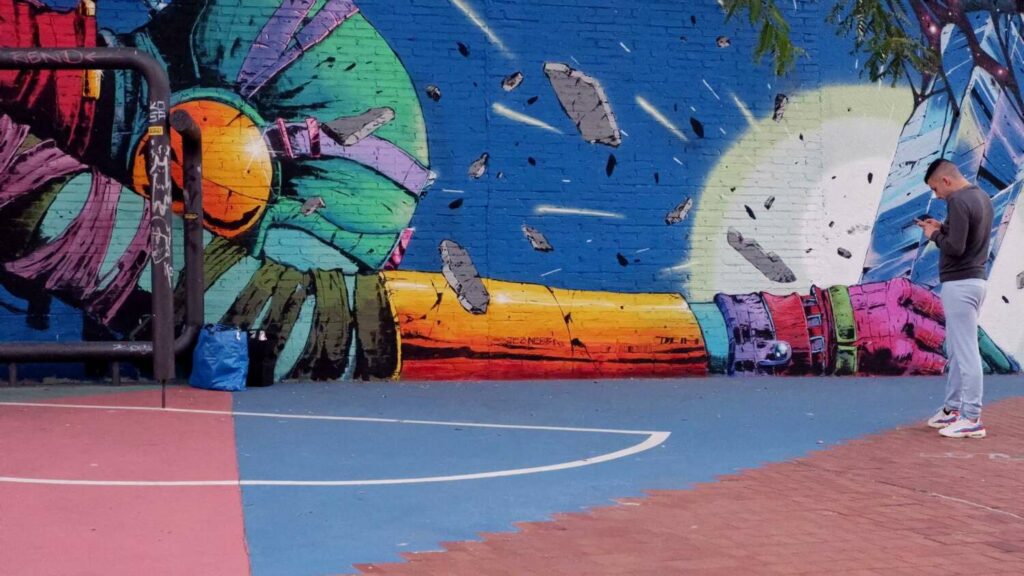 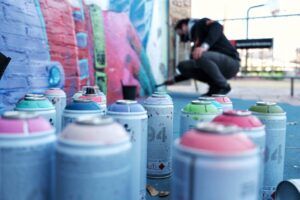 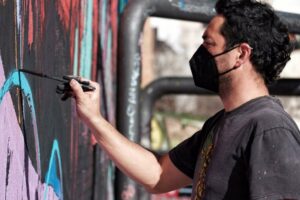 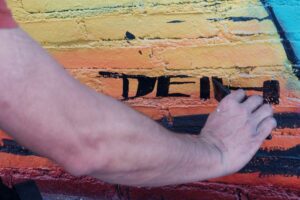 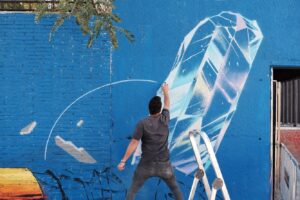 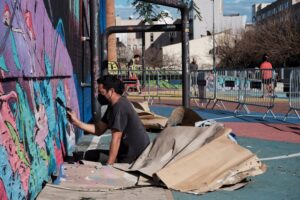 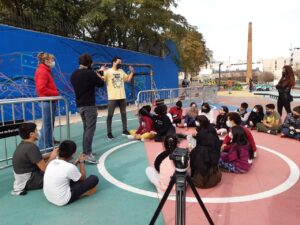 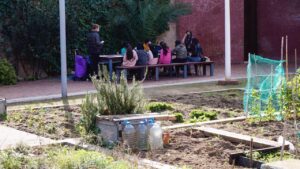 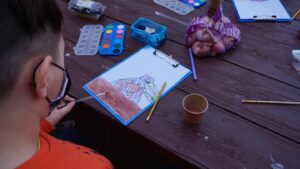 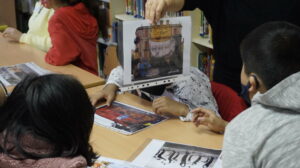 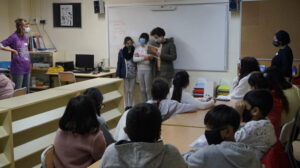 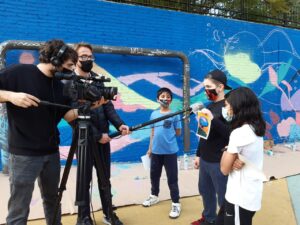 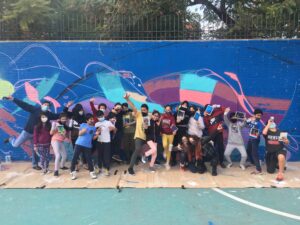 CONNECT is the name of the last project we have been developing throughout the month of January 2021 in Sant Pau del Camp park (Raval, Barcelona) with the guest artist DEIH, under the theme of ecology and the environment.

The objective was to raise awareness about ecology and the climate crisis with creative tools related to urban art. This work is the result of three workshops led by B-Murals with a group of 20 students (between 10 and 12 years old) from the Collaso i Gil school which ended up with the renovation of the mural. Deih offered us a cosmic and powerful vision of this thematic showing us the need to reconnect to earth and its different elements.

Following his intervention in Sant Pau del Camp park, we invited DEIH to paint a lateral on Arnau Gallery, the other project we are curating situated just near. Called BORN TO VIBRATE, the mural is an invitation to travel in the Barcelona of 2049 with a cosmic cyber punk creature. Painted in less than 8 hours, Deih showed us his skills on this 4×4 mural in his traditional 80’s style which he developped in his hometown Valencia. 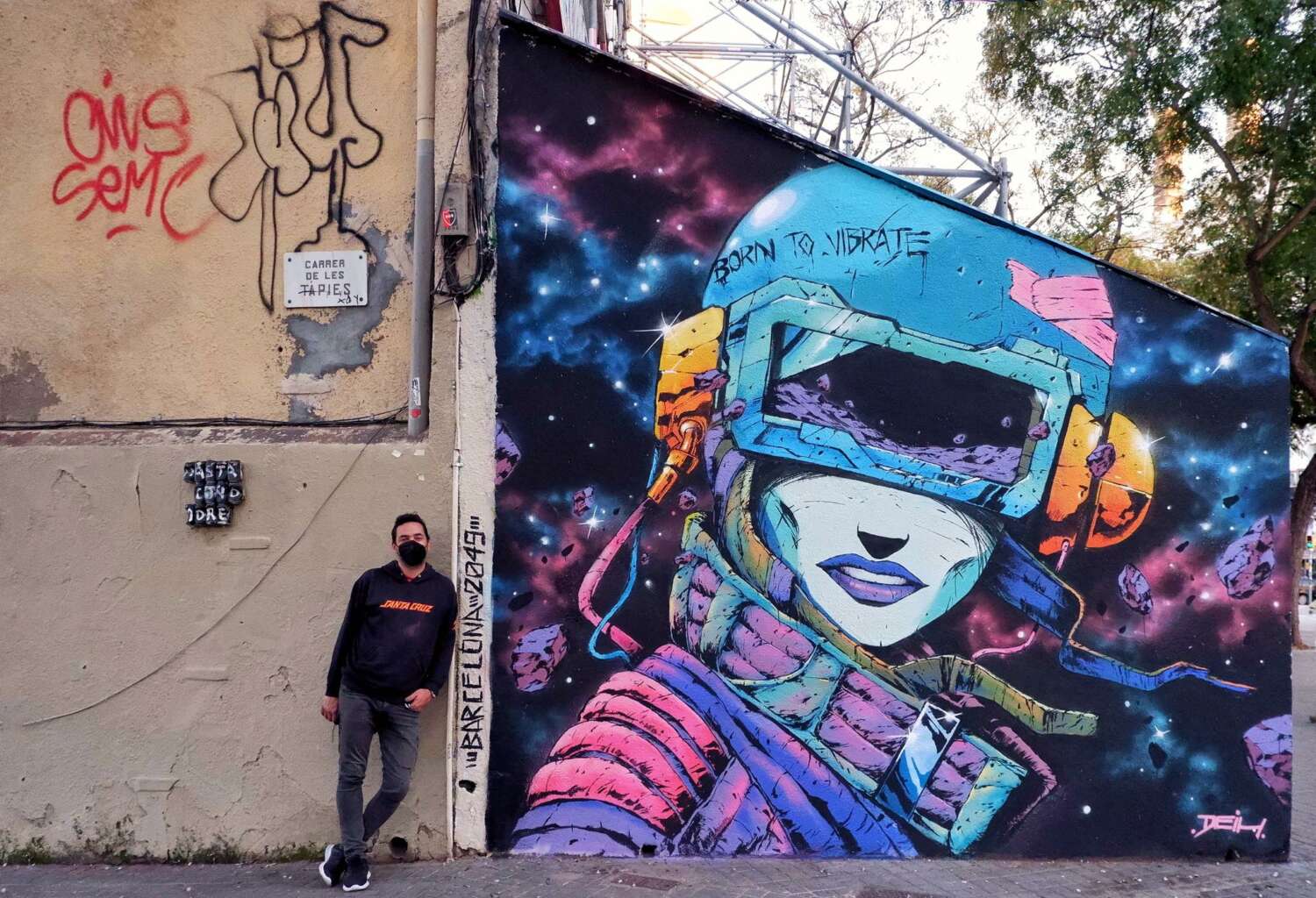 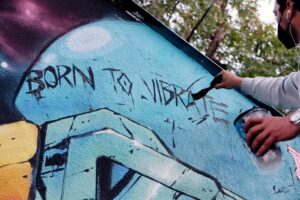 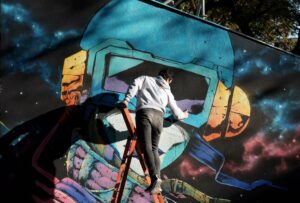 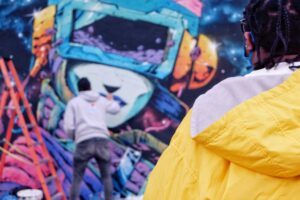 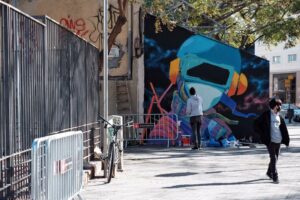